Christian McBride waved the audience to applaud. They finally gave a standing ovation. 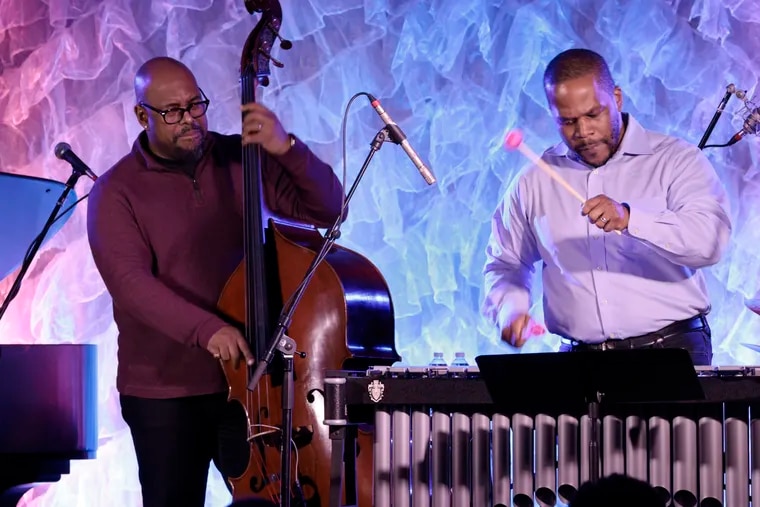 Sunday dinner at Montco may not be Saturday night in Philadelphia, but it’s close enough that Christian McBride doesn’t stick around as a crowd near his hometown remains wisely quiet. After hearing the audience from Normandy Farm to Blue Bell fail to applaud after solos at the start of a late February gig of his Inside Straight quintet, the bassist offered a wry reprimand.

“No disrespect to Keith Jarrett,” McBride said, referring to the pianist known for demanding respectful silence during his performances, “but the people of Philadelphia are cheering.”

He didn’t need to remind them again. During the next song of the set, the majestic “Ms. Angelou,” the ballroom erupted in cheers midway through McBride’s own solo. It probably had less to do with the scolding and more with the bass player’s deeply elegant playing, which glided over the bass with the poetic grace of the melody’s namesake.

Few bassists in jazz history have shared McBride’s astonishing fluidity on bass. He manages to play the unwieldy instrument with a nimble and nimble touch while maintaining a robust and catchy low end, rooted as much in R&B and gospel as in the classic jazz for which he carries such a torch. Inside Straight, which McBride reunited in 2007 and became the longest-running working group of his career, also became the best vehicle for his muscular and soulful take on music.

The band’s latest album, Live at Village Vanguard, brings Inside Straight – originally formed for a week-long commitment to the venerable New York club – come full circle. The animated 90-minute set drew material from all three of the band’s albums. The show was presented as part of Montgomery County Community College’s Lively Arts Series, currently nomadic as the college’s theater is undergoing renovations.

Looking forward to their first month-long tour since the pandemic began, McBride said Inside Straight “feels like home, musically and spiritually.” He credited vibraphonist Warren Wolf with inspiring the band, his shimmering expressiveness inspiring the bassist to build a band around him. Wolf’s solo was the culmination of several tracks, including a fiery, feisty spin on his own “Sweet Bread” and a swaggering dance atop the funk grooves of McBride’s James Brown-inspired “Brother Mister.”

Wolf shares the front line with understated saxophonist Wilson, whose playing unerringly opts for tasteful eloquence over pyrotechnics. On “Sweet Bread,” he started with sharp, sharp punches that gathered their strength in a torrent of searing runs. On his ballad “Ms. Angelou”, birdbeats alternate with melodic filigrees of caramel sweetness.

McBride chose the standard “Alone Together” as a showcase for Inside Straight’s deft rhythm section, whittling the band down to a trio of himself, pianist Peter Martin, and drummer Carl Allen. The bandleader began the track solo, spinning a stunning tapestry of variations of the song’s familiar melody. Allen finally came in with subtle, slamming cymbals; his use of brushes throughout the song brought beautiful dynamic accents to Martin’s lyrical keyboard work, then morphed into a haunting soft-shoe routine for the drummer’s solo. McBride’s bold solo spurred the trio into a fervent finale, quoting Miles Davis’ “So What” to a ripple of appreciation from the now-vocal crowd.

That early silence had long been forgiven, if not entirely forgotten, when the set ended with trumpet legend Freddie Hubbard’s “Theme for Kareem.” Pointing to a woman seated at a table near the stage, McBride expressed gratitude for her enthusiasm: “I never looked up and saw you smiling,” he said, then singled out another audience member for his air drumming during Allen’s more explosive moments.

To another enthusiastic listener, he offered the highest of compliments: “I know you must be from Philadelphia.” The reward was a frenzied rendition of “Patterns,” a track by drummer and Chester native Joe Chambers, ending the night with a standing ovation.