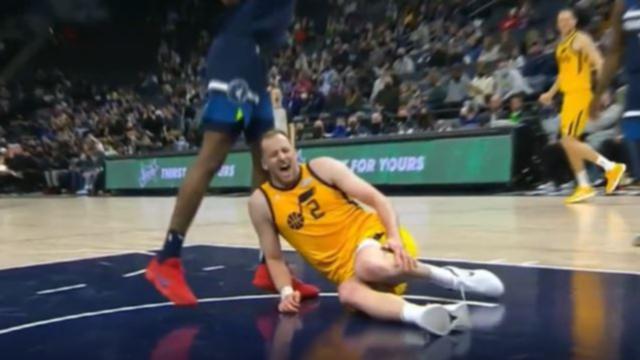 Australian veteran Joe Ingles is hoping for positive lab results after suffering what appeared to be a serious knee injury in the NBA clash between Utah and Minnesota.

Ingles was heading for the basket in the second quarter when his left knee bent and gave way, with no contact on the play.

The 34-year-old was left writhing in pain on the hardwood before being helped off the pitch and sent for scans.

Ingles and the Jazz will be desperate to avoid a ruptured ACL and its associated nearly year-long recovery process.

“It’s hard but not everything is meant to be easy… just pray for Joe, hopefully it’s as little as possible.

“He was in a tough state (at half-time), everyone came over and told him we love him, gave him a hug.”

The Aussie had been living a dream six months before the injury, helping the Boomers win their first Olympic medal with bronze in Tokyo before helping lead the Jazz to the NBA’s current fourth-best Western Conference record.

Ingles has averaged 7.4 points and 3.5 assists per game as a key part of a Jazz roster looking to win a title this season.

The swingman is in the final year of a contract worth just over US$13 million (A$18.5 million).

Ingles’ injury came after Jazz coach Quin Snyder was forced to miss the game after being placed under the league’s COVID health and safety protocols.